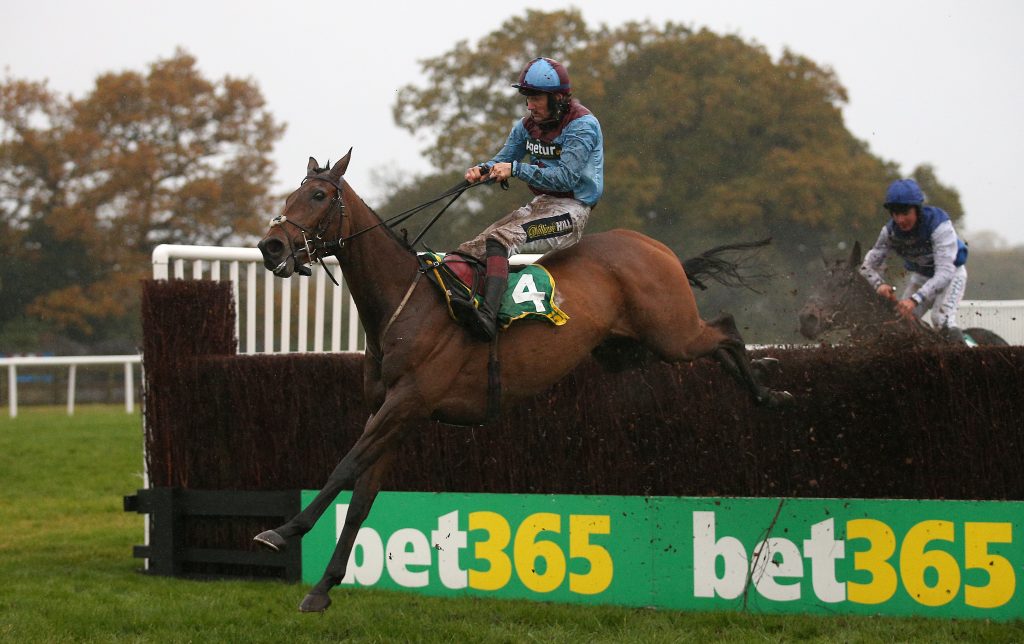 Ballyoptic provided Nigel Twiston-Davies with a sixth success in the bet365 Charlie Hall Chase at Wetherby, staying on best of all to beat Elegant Escape. The nine-year-old failed to complete in three of his four races last season – but has won both his outings in the new campaign and connections intimated in the aftermath that he could now join stablemate Bristol De Mai in the Betfair Chase at Haydock. Well-supported throughout the morning in anticipation of the rain which fell in the afternoon, Ballyoptic was sent off the 11-4 second-favourite behind La Bague Au Roi, but Warren Greatrex’s mare never looked happy on the heavy ground, making several uncharacteristic mistakes. Top Ville Ben gave them a good lead and was still in front turning into the straight, although by the third-last he had been passed by Aso, with the Ryanair runner-up stepping up in trip. Ballyoptic began to wear him down, but just when it looked like he had done enough Welsh National winner Elegant Escape began to stay on strongly, only for the line to come too soon, with the winning distance three and three-quarter lengths. Twiston-Davies had already won the Grade Two feature with Tipping Tim (1992), Young Hustler (1994), Ollie Magern (2005, 2007) and Bristol De Mai (2017). Sam Twiston-Davies was winning the race for the first time and said: “Nige does a very good job and as everyone knows he likes to start the season well. When you’ve had a run under your belt in conditions like that, it’s a big help. “He gallops strong and stays well and while his jumping has been indifferent in the past he was good enough today. “He didn’t have some of the penalties some of the others had, but he’s incredibly tough, has a great attitude and goes on the ground, so while it stays like this why not have a crack at the Betfair – you’ve got to dream.” The trainer added: “He’ll definitely be entered in the Betfair, we’ve probably got the winner of that in Bristol De Mai, but if we can have the one-two that would be lovely. “He’ll be handicapped out of everything now, so why not?”