Doctor Bravo stars in Down Royal double for Elliott 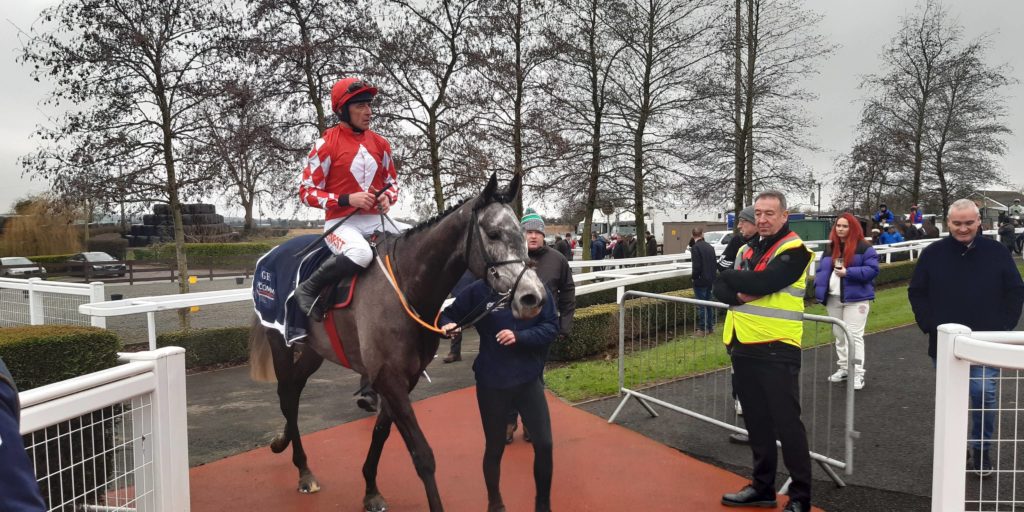 Doctor Bravo paid a handsome compliment to his Leopardstown conqueror Dark Raven when beating The Big Doyen in the Molson Coors Beverage Company Maiden Hurdle at Down Royal. Peter Fahey’s The Big Doyen was sent off the 10-11 favourite to open his account over timber having finished second at both Punchestown and Fairyhouse already this season. Having travelled sweetly throughout for Kevin Sexton, he ended up needing to pull wide in the straight to make his challenge while Davy Russell stayed on the rail on Doctor Bravo (11-10), who eventually pulled two and three-quarter lengths clear. Gordon Elliott has entered the winner in both the Supreme Novices’ Hurdle and the Ballymore at Cheltenham but intimated afterwards the latter would be more likely. Willie Mullins’ Dark Raven, who was having his first run for 631 days when beating Doctor Bravo on St Stephen’s Day, is a possible for the Dublin Racing Festival. “He’s a nice horse but probably wants a bit further,” said Elliott. “Davy said he did well because it was a messy race and he kind of got stuck in a pocket. He showed a good attitude and he said the best of him was from the last to the line.” Elliott also took the concluding bumper with the impressive 15-length winner No Time To Wait (6-4) who previously had finished third to Mullins’ Ile Atlantique at Leopardstown over the Christmas period. The winner was given a 10-1 quote by Paddy Power for the Champion Bumper in March but whether he runs there sounds debateable at present. Elliott said: “He’s a big galloping horse. A horse for next year, a fine big horse. Look he is a horse to go jumping in the future to be honest. He won’t jump a hurdle this year, he jumps well at home but is a horse for next year.” Gavin Cromwell has had an excellent start to 2023 – barring the news that dual Stayers’ Hurdle winner Flooring Porter has met with a setback – and registered another winner through Limerick Lace in the Irish Stallion Farms EBF Rated Novice Chase. The JP McManus-owned mare was sent off the 8-11 favourite and had little trouble in seeing off Irish Blaze by eight lengths. “I’m pleased with that and it is grand to get her to win one,” said Cromwell. “I’m not sure where we go from here to be honest. I suppose you would love to pick up a bit of black-type along the way. “Yes, potentially (there is a nice handicap in her) and she will stay further.” The Gradual Slope (7-2) set up a trip to the Dublin Racing Festival with a narrow win over Marelly in the Franciscan Well Rated Novice Hurdle. Winning trainer Sean O’Brien said: “I was down on the track and Gordon (Elliott) said that the outside horse (Marelly) had got up! Cian (Quirke) was very confident he got up. “He will go for the three-mile handicap at Leopardstown (Dublin Racing Festival). He’ll obviously get in just right. Three miles is a bit of an unknown for him, but it is definitely worth a crack.” Also on the card, the 14-year-old Wee Small Hours (6-1) won for the first time over fences and for the first time since January 2018 in the Aspall Handicap Chase.