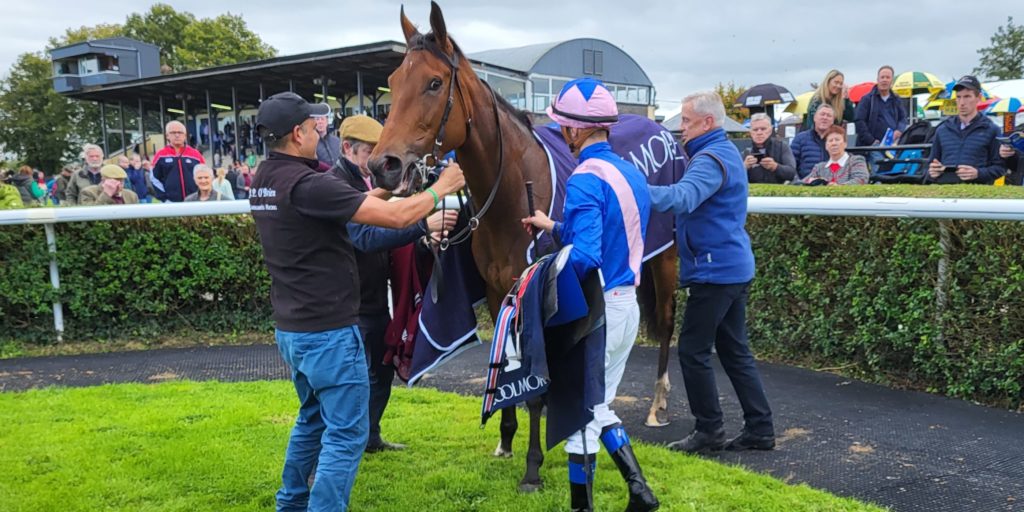 Statement lived up to her name in impressive fashion, powering to a wide-margin success in the Group Three Coolmore US Navy Flag Concorde Stakes at Tipperary. The Joseph O’Brien-trained four-year-old was quickly turned out, having taken a Listed race at Cork on Tuesday, which provided her with just a second career success. Yet the lightly-raced daughter of Lawman proved a completely different proposition over the extended seven-furlong trip, the 5-2 favourite appreciating the soft ground and quickly scooting clear with two furlongs to race under Dylan Browne McMonagle. Winner of the 2020 renewal, Current Option gave vain chase, but did little to cut into the deficit and ended five and a half lengths adrift at the line, with Prettiest a further length and a quarter back in third. O’Brien’s assistant, Brendan Powell, said: “Dylan was delighted with her, it was even a much improved performance on the other day in Cork. “It was softer today and Dylan said she actually quickens on that ground, he said he hadn’t realised that he’d won so far. “It was exciting and she’s a filly going forward. Hopefully there are more options for her – if she likes this soft ground, she’s going to get that from now until the end of the season. “You’d be thinking she had a tough enough race down in Cork, but she’s come out of it well and she was bucking and kicking the next day.” There were also two Grade Three hurdles on the card, with Champ Kiely (4-5 favourite) backing up his eye-catching debut over obstacles at Galway when taking the two-mile Fitzgerald’s Woodlands House Hotel Novice Hurdle. Back in trip, Danny Mullins decided not to hang about on the six-year-old, trained by his uncle, Willie Mullins, and made all impressively. Though he hung right throughout, Mullins wound things up from three out and kicked quickly clear approaching two flights from home. “He was very good. He showed his stamina in Galway and backed up that with speed today. He’s ticking a lot of boxes,” said Danny Mullins. “He looks to be going the right way. Off a strong pace he quickened which not many can do.” Jesse Evans (7-4 joint-favourite) put race fitness to good advantage in landing the Horse & Jockey Hotel Hurdle for jockey Bryan Cooper and trainer Noel Meade. The two-mile race set up perfectly for the Galway Hurdle runner-up, who travelled sweetly throughout. The six-year-old tracked the pace set by Effernock Fizz and with both Jason The Militant and Abacadabras failing to make much impression, Cooper swept by between the last two flights to score by four and a half lengths. “Paul Carberry came to me the other day and he said to me, ‘you are riding that horse all wrong’,” said Meade. “He said to tuck him in and use his speed and that we were throwing races away. He said to hold him up, take our time, because he has a lightning burst of speed. “I know the race fell apart, and the two fancied horses didn’t run well, but still it was nice to see him quicken up the way he did. “He’s a nice horse, I’m not sure what exactly I’m going to do with him next. We might try a graded race with him again and see how we get on. “He does like goodish ground and wouldn’t like winter heavy. He’s not unlike Go Native who actually won this a few years ago.” The Mullins team completed a double when Authorized Art put his four rivals to the sword with some quick and accurate jumping in the Grade Three O’Dwyer Steel Dundrum Novice Chase. Economical over his fences, the 5-6 favourite completed a hat-trick in thrilling fashion, the easy fences suiting his jumping style more so than main market rival Ash Tree Meadow, who tracked him throughout, but was already well beaten when making a bad mistake at the last. Mullins’ assistant, David Casey, said: “He jumped great. It’s a good, quick track around here and when you jump like he does it’s a help. “He put up a good performance. I know, obviously, the second made a bad mistake at the last but he looked like he had his measure anyway. “He enjoys jumping, he’s progressing well and getting better. He has stepped up from his hurdling. “I think he’ll handle softer ground but obviously he does handle that, maybe he wouldn’t handle very heavy ground. “We’ll try to make hay and keep going. There is a chance he could end up in the Drinmore but that’s two months away so there might be something in between. “If he keeps progressing we might give him a chance at it and see how far he can climb the ladder.”