Politologue has Aintree in sights 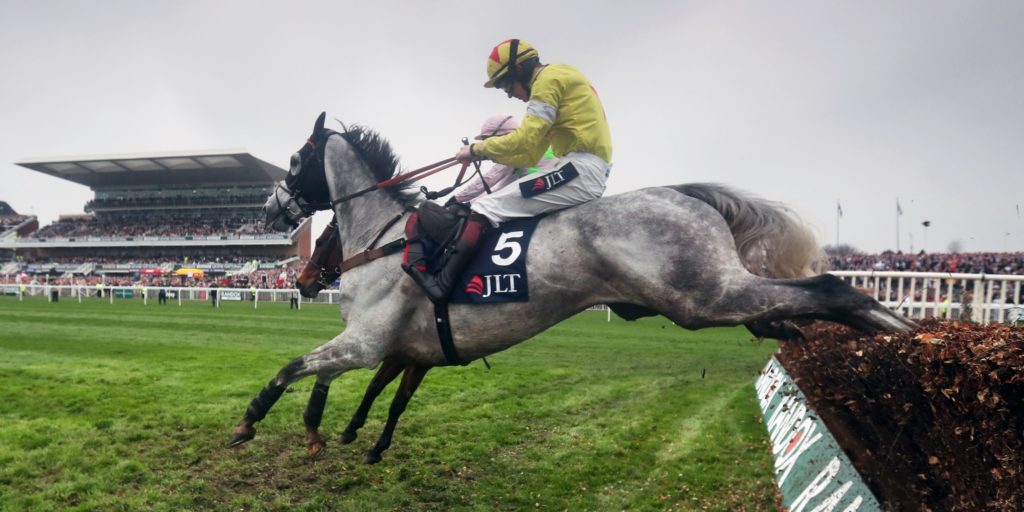 Cheltenham absentee one of 11 entries in Marsh Chase.

Politologue heads 11 entries in the Marsh Chase at Aintree. Paul Nicholls’ grey was denied the chance to defend his Champion Chase crown at Cheltenham last month when a trace of blood was found in his nostril minutes before going to post. The problem was nothing serious, and on Friday he is set to make his third appearance in a race registered as the Melling Chase – which he won in 2018. Nicholls could also run Master Tommytucker, Duc Des Genievres and Real Steel. Nuts Well, not sighted since winning the Old Roan over the same course and distance in October, could take on the big guns for the small stable of Ann Hamilton. Dashel Drasher, Lalor, Itchy Feet and Midnight Shadow complete the entries from Britain – while there are two Irish possibles, Fakir d’Oudairies, declared to run at Fairyhouse on Monday, and Henry de Bromhead’s Notebook. In the Betway Top Novices’ Hurdle, Dan Skelton’s My Drogo has the chance at the highest level to confirm the promising impression he has made this season. Stablemate Third Time Lucki, Nicky Henderson’s Dusart and Cheltenham absentee Dreal Deal are among the intriguing entries – along with Alex Hales’ For Pleasure, a highly creditable third in the Supreme last month. There are several four-year-olds entered – among them Alan King’s Tritonic, who disappointed when strongly fancied for the Triumph Hurdle. In the Betway Mildmay Novices’ Chase, Henderson’s Festival winner Chantry House is due to step up in trip to three miles for the first time. Colin Tizzard’s Fiddlerontheroof and The Big Breakaway, who both ran well behind Monkfish at Cheltenham, the Skelton pair of Shan Blue and Protektorat and Kim Bailey’s Happygolucky are among 18 entries. Also in the mix is Emmet Mullins’ The Shunter, who is likely to have a myriad of options once more through the week. The Doom Bar Sefton Novices’ Hurdle has attracted 23 entries, which include Mullins’ Cape Gentleman. Bravemansgame, Adrimel, Dreal Deal and Gallyhill are all included. The field for the Randox Topham Chase over the Grand National fences has been reduced to 32, with the Venetia Williams-trained Ibleo heading the weights.