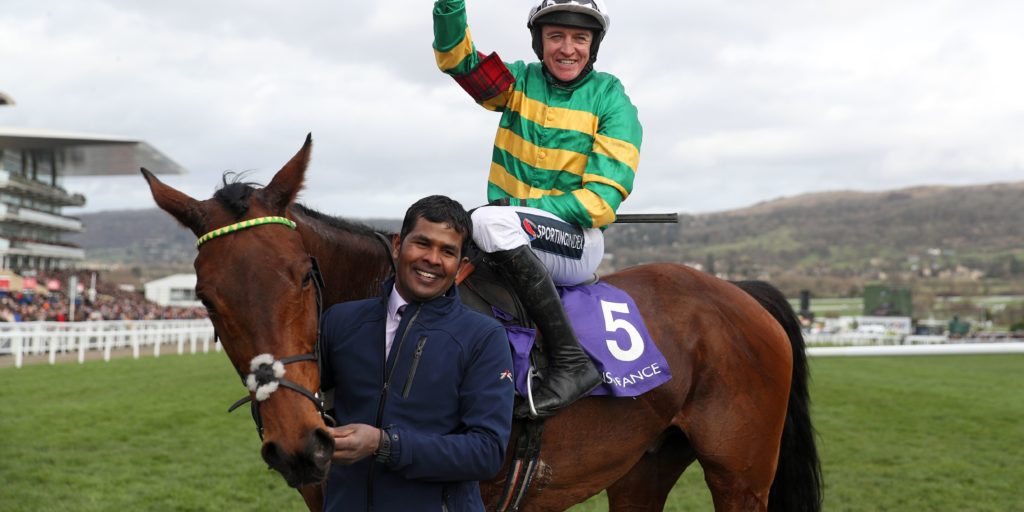 Cheltenham Gold Cup contender Champ is set to face five rivals in the Betfair Game Spirit Chase at Newbury on Sunday. Having been off the track since claiming a last-gasp victory in what is now the Brown Advisory Novices’ Chase at last season’s Cheltenham Festival, Nicky Henderson’s charge was originally due to make his long-awaited return in the three-mile Betfair Denman Chase. However, with Newbury’s Betfair Super Saturday card pushed back eight days after the original fixture was frozen off, Henderson has decided to instead run Champ over an extended two miles in the Game Spirit, due to the meeting’s proximity to the Festival. The likely favourite for the Grade Two contest is the Paul Nicholls-trained Greaneteen, who was last seen filling the runner-up spot behind stable companion Politologue in the Tingle Creek at Sandown in December. The Ditcheat handler also runs Dolos and Magic Saint, while Alan King is represented by the high-class Sceau Royal. Fanion d’Estruval, trained by Venetia Williams, completes the sextet. In Champ’s absence, Nicholls’ dual King George hero Clan Des Obeaux will be a warm order for the Denman Chase. The nine-year-old could finish only third when bidding for a hat-trick at Kempton on Boxing Day, but is odds-on to win this prize for the second time, having struck gold two years ago when the race was run at Ascot. Nicholls has a second string to his bow in Secret Investor. Colin Tizzard’s Lostintranslation disappointed in the King George, just as he did last season, but undoubtedly has the talent to give Clan Des Obeaux a run for his money if he can bounce back to the form that saw him finish third in last year’s Gold Cup. Amy Murphy steps stable star Kalashnikov up to three miles for the first time over fences, while David Bridgwater runs The Conditional in a bid to find out whether he deserves a tilt at Gold Cup glory. Jeremy Scott has declared Dashel Drasher, but has confirmed he is set to take his chance in Saturday’s Betfair Ascot Chase. Cepage (Venetia Williams) and Terrefort (Nicky Henderson) are the other hopefuls. The most valuable race on the card is the GBP 125,000 Betfair Hurdle, for which a maximum field of 24 runners are set to go to post. Nicky Henderson, who has already won the race on five occasions, launches a three-pronged assault, with top-weight Buzz joined by Fred and Mister Coffey. Nicholls also has a trio of runners in Wild Max, Friend Or Foe and Thyme White. Other leading fancies include Dan Skelton’s Cadzand, the Jonjo O’Neill-trained Soaring Glory and Edwardstone from Alan King’s yard.