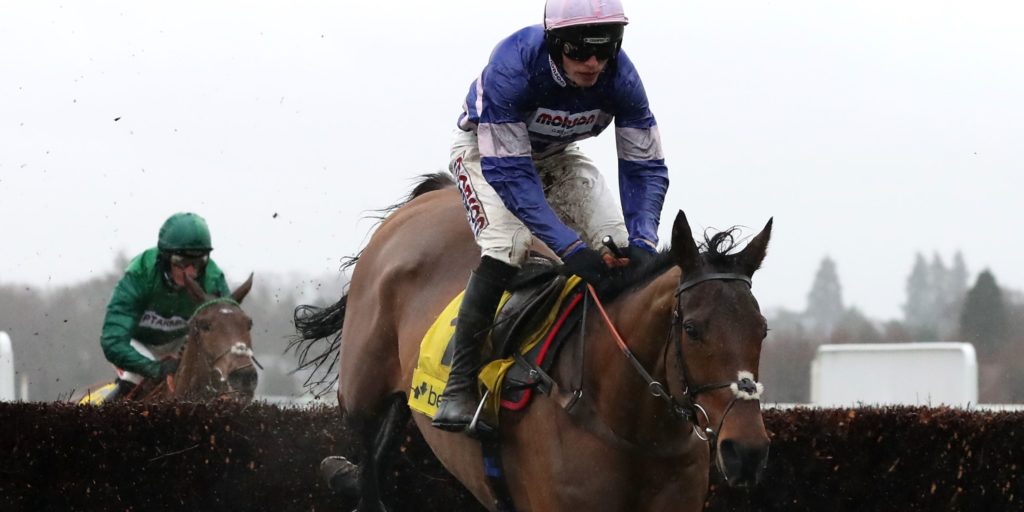 Nicholls’ star will bid to regain his Grade One title on Saturday.

Harry Cobden is backing Cyrname to revisit his impressive winning performance in the 2019 Betfair Ascot Chase when he contests this season’s renewal of the race. Cyrname was a facile 17-length winner of Saturday’s Grade One for Paul Nicholls two years ago, leaving high-class horses such as Waiting Patiently and Politologue in his wake and earning himself a mark of 176 – as Britain’s highest-rated jumps horse. His 2020 title defence ended with a shuddering fall when already well beaten by Riders Onthe Storm, but he looked as good as ever as he cruised to victory in the Charlie Hall Chase at Wetherby in October. Kempton’s King George VI Chase was the next port of call, in which Cobden’s mount was below par and pulled up as stablemate Frodon instead stormed to victory. Cobden is consequently keen to take a different approach this weekend and plans to keep the nine-year-old among the leading group from the outset in a race for which there were 10 confirmations on Monday – including another from Nicholls’ powerhouse yard, Master Tommytucker, and also Riders Onthe Storm. In a call hosted by Great British Racing, Cobden said: “I think we might adopt slightly different tactics in that we might ride him slightly more aggressively. “We don’t necessarily have to make it (the running), but I don’t really want an episode of Kempton last time. “I wasn’t very happy with my position the whole way round, because I was probably too far back. I made a bit of a move, but I was too wide – although I didn’t have any other option – so I had to go round a few horses in front of me. “He winged the ditch, he jumped it very well, and then he missed the last fence down the back – and that was our race over. “I didn’t really want to carry on for the sake of carrying on, (so) we just pulled him up and saved him for another day.” Cyrname appeared slightly reluctant at the start in the King George. Cobden added: “I had the perfect position down at the start, but Cyrnname wasn’t that keen to jump off for some reason – I couldn’t tell you why. “I was slow away and jumped the first quite slowly – and before you know it, we were sixth or seventh, too far out the back. “He just didn’t really feel to me like he wanted to go. But he came out of the race absolutely bouncing – and he went into the race bouncing – and we couldn’t find anything wrong with him afterwards.” While Cyrname is bidding to bounce back from that disappointment, Nicholls’ Master Tommytucker was most impressive when last seen claiming Kempton’s Grade Two Silviniaco Conti Chase by an emphatic 12 lengths. That form provided Cobden with something of a headache when it came to picking his mount this weekend, but he has opted to stick with Cyrname and his solid course-and-distance form. “Going into the race, he is obviously the one to beat on paper – looking at the entries it’s quite a competitive little race,” he said. “Paul runs Master Tommytucker, and there are quite a few other good horses. So by no means is it an easy race – but I think Cyrname is the worthy favourite. “If Master Tommytucker turned up and absolutely blew them away it wouldn’t surprise me – he’s got a serious engine in there. “If he gets in a good rhythm and he starts jumping well and everything’s going his way, he’ll be very hard to pass. “Paul’s always said it, and I totally agree, there is a massive race in that horse at some stage this season. “Whether it’s on Saturday, I don’t know, but I think he will turn up and win a Grade One shortly.” That potential gave Cobden much to ponder before he chose Cyrname this weekend. “It was quite a tough decision, actually,” he said. “(But) the thing is, Cyrname’s been to Ascot and he’s done it. “If he turns up with three-quarters of the ability he had when he won there two years ago, he’s going to be hard to pass. “I’m a believer and I’m confident he’s going to turn up and run his race. “He’s going there in tip-top condition and hopefully he can give us a bit of a showdown and reproduce what he did two years ago.” On the ratings, Cyrname’s toughest opponent is the Colin Tizzard-trained Lostintranslation – who will be dropping down in trip if he runs on Saturday. Winner of last season’s Betfair Chase, Lostintranslation was only narrowly beaten in the Gold Cup in March but was a distant third in his Betfair defence in November – and once again failed to run his race in the King George. As well as Nigel Twiston-Davies’ Riders Onthe Storm, Cyrname may again face Harry Whittington’s Saint Calvados – a close second in last year’s Ryanair Chase and fourth in the King George, before unseating Gavin Sheehan in the rearranged Cotswold Chase at Sandown. Bennys King, Dashel Drasher, Fanion D’Estruval, Kalashnikov and Terrefort complete the list.