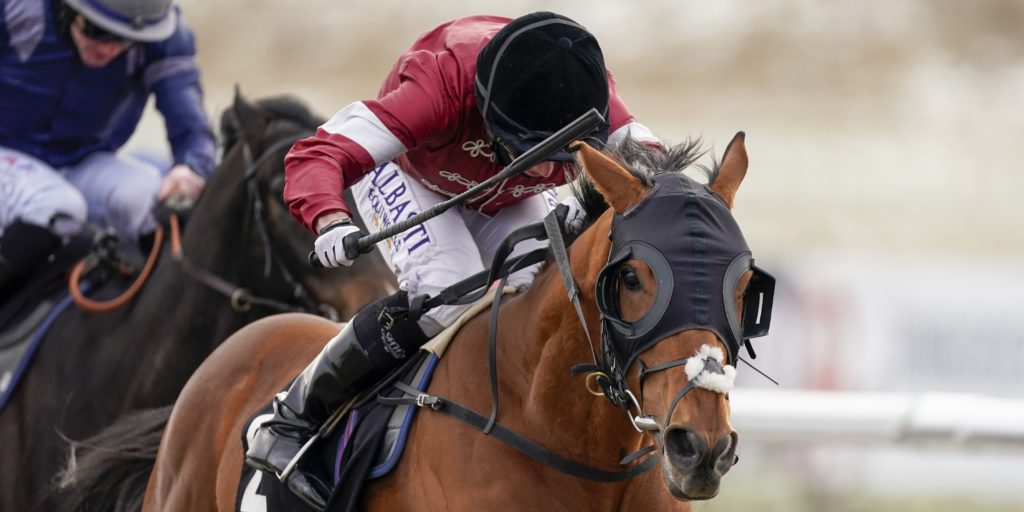 Former champion just misses out on perfect five from five.

Ryan Moore is a fairly rare visitor to Lingfield at this time of year – but he once again advertised his class in the saddle when winning on four of his five rides at the Surrey venue. Moore – who next weekend hopes to be in Saudi Arabia – was booked for five rides for five different trainers, and only Richard Hannon’s odds-on Mummy Bear in the Ladbrokes Watch Racing Online For Free Fillies’ Novice Stakes let him down, finishing third. The day began for Moore with a victory on Ed Dunlop’s Ahdab (even-money favourite) in the Bombardier “March To Your Own Drum” Novice Stakes. Dunlop’s travelling head lad Robin Trevor-Jones felt the addition of a new Wexford round gallop at La Grange stables played a part in his first win. Trevor-Jones said: “It’s an excellent soft sand facility and this is the first horse to come off it and win for us. “The boss is friendly with Jamie Osborne, who said that he uses one and that he has many more sounder horses because of it. This horse is a lovely, big Shamardal and Ryan said the surface was deep and he liked it.” The Roger Teal-trained Gurkha Girl (4-6 favourite) was next in the Play Ladbrokes 5-A-Side On Football Fillies’ Novice Stakes and she eventually came home two and three-quarter lengths in front of 50-1 shot Waltzing Queen. Martyn Meade’s Crackling (10-11) was another to justify odds-on favouritism, in the Bombardier British-Hopped Amber Beer Handicap. It was hard work, though, as Crackling, having just his fourth run at the age of five, still showed signs of inexperience in beating Apex King a neck. “Ryan is a great asset to have on a horse like this who is still a bit green and improving with racing,” said assistant trainer Freddie Meade. “He’s lightly-raced and looked like the progressive one in the contest. “We’ve taken our time with him and he’s come back happily to show us that he’s in good spirits.” Meade also had news on stable star Method, who will be aimed at Royal Ascot. “We’ll look at the Commonwealth Cup and work back on a plan from there,” said Meade. Moore was perhaps seen to best effect on Hugo Palmer’s Convertible (100-30), who came flying down the outside to win the Betway Casino Handicap by a length and three-quarters. Moore said: “Convertible had good form on grass and has done the job well. He was very straightforward and entitled to win. “Crackling is just a baby still who is learning all the time and I was very pleased with the way he did it.” Regarding his plans for the coming weeks, Moore admitted they were still far from certain, for obvious reasons. “I hope to be able to go to Saudi, which is the plan, although everything is very complicated at the moment with the situation changing all the time,” he said.