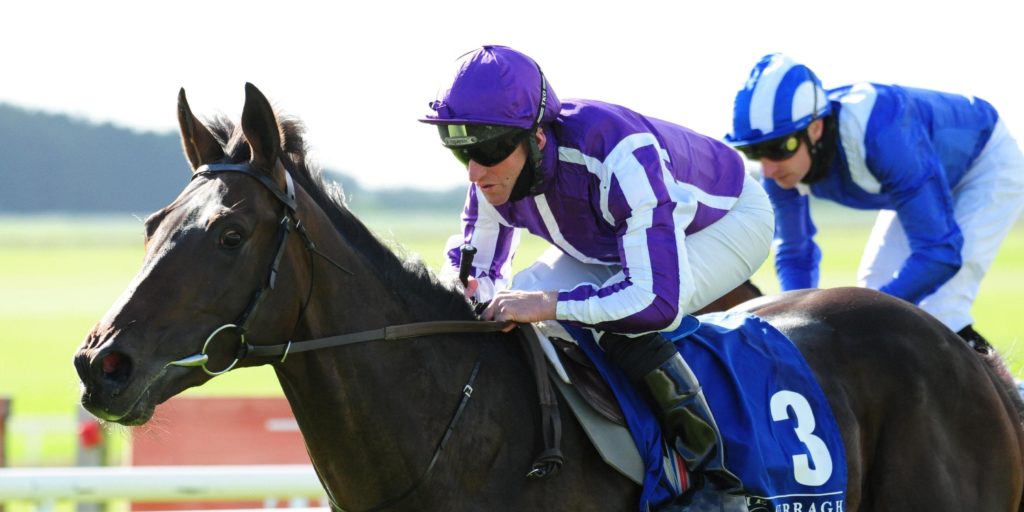 Classic trial could be favoured over 2000 Guineas.

Aidan O’Brien is favouring a Derby trial over a tilt at the 2000 Guineas with his unbeaten colt High Definition. An impressive winner on his racecourse debut at the Curragh in the summer, the son of Galileo subsequently rocketed to ante-post favouritism for Epsom after storming home to win the Group Two Beresford Stakes in September. O’Brien deliberately decided against running his charge in one of the end-of-season Group Ones and is excited to see what he can accomplish as a three-year-old. Speaking on a press conference to discuss the European two-year-old classifications, O’Brien said of High Definition: “He’s a big, rangy horse with an unbelievably long stride. He’s uncomplicated and has a good mind and has done very well over the winter. “In the Beresford it looked like he couldn’t win for most of the race as on the round track at the Curragh it’s tough to make up ground. It looked like he couldn’t win a furlong down, he had a chance half a furlong down and won very easy at the line. “At the moment he’d probably be a shorter price to go to a Derby trial than the Guineas, but the lads (owners) will make a decision and see what they want to do. “The Guineas is obviously a great trial for the Derby, but when we have other horses there for the Guineas, it’s very possibly that High Definition might go to a Derby trial. “He might only have one run before the Derby if he was doing that, I think.” The three horses O’Brien currently has pencilled in as his chief Guineas contenders are St Mark’s Basilica, Wembley and Van Gogh. St Mark’s Basilica, who has been crowned champion two-year-old in Europe for 2020, narrowly beat Wembley in the Dewhurst Stakes at Newmarket in October, while Van Gogh rounded off his season with a Group One success in the Criterium International at Saint-Cloud. All three horses were beaten in their first two career starts before making marked progress – and O’Brien admits it is difficult to assess the juvenile crop overall, with the coronavirus pandemic meaning the season did not get under way until early June. “The year was really a mess,” said the Ballydoyle handler. “With St Mark’s Basilica, we kind of rushed him out to get a run into him and then rushed him back to run in the Heinz (Phoenix Stakes). “It was all just happening too quick for him and he was on the back foot. In all fairness to him, he toughed it out and did man up. “Wembley is another a horse we always liked. We thought he’d win at the Curragh first time and when he got to the front he was very green and babyish – he was like that a good bit. “I suppose the form is open to question. Quite a lot of horses finished on top of each other, but Sir Mark’s Basilica and Wembley are two solid horses that are tough and learned a lot last season. “Van Gogh is a big horse who was always going to be a big three-year-old – he could make an awful lot of improvement.” The horse priced up as favourite for the Guineas with several bookmakers is Battleground, who won the Chesham at Royal Ascot and the Vintage Stakes at Goodwood before finishing second at the Breeders’ Cup. However, O’Brien raised the possibility of the son of the yard’s Arc heroine Found sidestepping Newmarket and instead being trained with a return to the Royal meeting for the St James’s Palace Stakes as his chief objective. He said: “He’s a Guineas horse as well, like the other three, but it’s very possible that if all of them are going to the Guineas, Battleground could go to Ascot and maybe have a run before, rather than them all going to the Guineas. “He’s a lovely horse and Newmarket would suit him. I suppose it depends on how they’re all going to fall, and obviously we’ll have to look at the Irish Guineas and the French Guineas as well. “The English Guineas is the first one, so I’d imagine he will be in the mix for that, along with the two Dewhurst horses and Van Gogh. “Whether Battleground goes there or goes for an easier race and then goes for the St James’s Palace – I suppose it will depend on how the spring is going with them all really.” O’Brien was a notable absentee from British racecourses last season, due to the restrictions put in place to combat Covid-19. He is keeping his fingers crossed the situation improves during the coming weeks and months to allow more freedom of movement, while he is hopeful the current travel issues being caused by Brexit will also be resolved relatively soon. “We’re taking it one day at a time like everybody else,” O’Brien added. “I think there might be some new quarantine rules coming in for people in Europe, which mean you’ll have to quarantine for one or two weeks when you arrive (in Britain). “If that is the case, it will be like going to Australia. When we go there, we send the people down to do their two weeks quarantine and they stay there then. “We had a team in Newmarket last year, so something like that could happen again, but it would be great if we could all be there. “We’re lucky that the Brexit thing should be resolved before it comes our way. Hopefully, come Guineas time, it will all be a little bit more straightforward.”