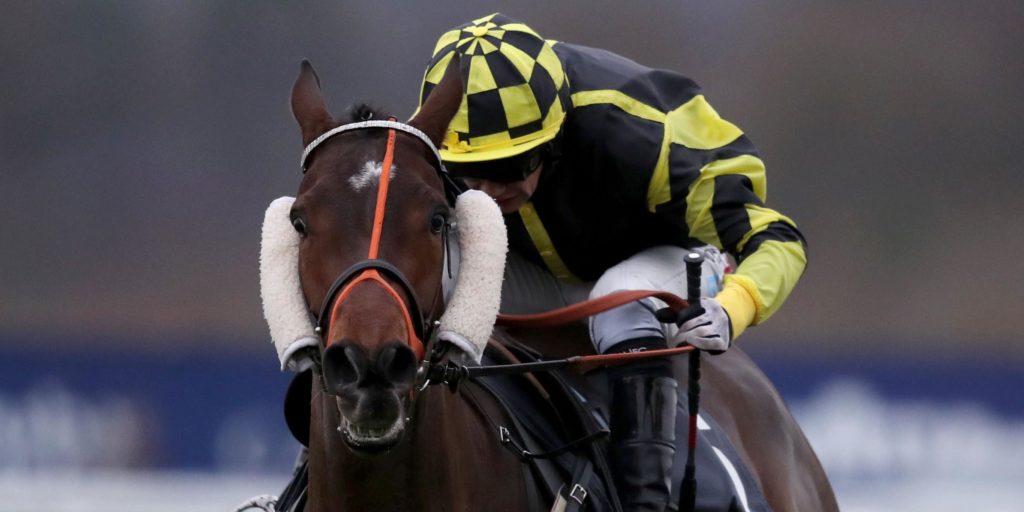 Golan Fortune will attempt to enhance his Randox Health Grand National prospects by claiming victory in the McCoy Contractors Civils And Infrastructure Hampton Novices’ Chase at Warwick on Saturday. The seven-year-old bids to resume his progression over fences in the three-mile Grade Two prize – and move a step closer to giving trainer Phil Middleton his first runner in the Aintree spectacular. Having made a winning debut over fences at Ludlow last month, Golan Fortune out-ran his 40-1 price tag upped to Grade One level when finishing fourth in the Kauto Star Novices’ Chase at Kempton on Boxing Day. Middleton said: “If he does run a big race I would like to go for the Grand National. “He is off 142 at the moment and you need to be about 145 to get in, so hopefully the handicapper would put him up a few pounds if he goes well. “He has won and finished in the first four of a race over three miles and this will be his third three-mile chase run, which qualifies him for the Grand National. “I had Exitas miss the cut a few years ago for the National and I might not get another chance for a runner in it, so I’d like to go for it.” Middleton reports his stable star, who claimed Listed glory over hurdles at Cheltenham last season, to be in excellent order. He said: “I was chuffed to bits at Kempton and he will be better for that. We go there full of hope. “When you look at the ratings he has not got a lot to find with Next Destination and the horse he beat at Newbury (Kalooki) was behind us at Kempton, while Fiddlerontheroof has been second a good few times. “Kielan Woods is full of hope, he popped him over a few obstacles this week and he jumped fantastic.” Jockey Harry Cobden is confident dual Grade One-winning hurdler Next Destination will have no problem handling the testing conditions. The nine-year-old secured his first victory since joining Paul Nicholls from Willie Mullins when making a winning debut over fences in a Grade Two at Newbury. Cobden said: “It was his first time over fences last time and he jumped really well and travelled great. He did everything right. “The ground was better at Newbury, but that shouldn’t make much of a difference at Warwick as he won on quite testing ground over in Ireland. “I schooled him on Monday and he was fine. He seems great at the moment. He has lots of class for sure.” Connections of the Colin Tizzard-trained Fiddlerontheroof expect the step up in trip to suit the seven-year-old, who has filled the runner-up spot on three of his four starts over fences this season. Assistant trainer Joe Tizzard said: “Stepping him up to three miles is something we have had on the back of our mind for some time, and he looks like he wants every yard of it. “He has been consistent all season long, he has lost nothing in defeat – he has just come up against some decent horses. “This looks the right race to run him in and I think Warwick will suit him as he is a very good jumper of his fences. He has just got to prove he gets the trip and if he does he will be right there.”