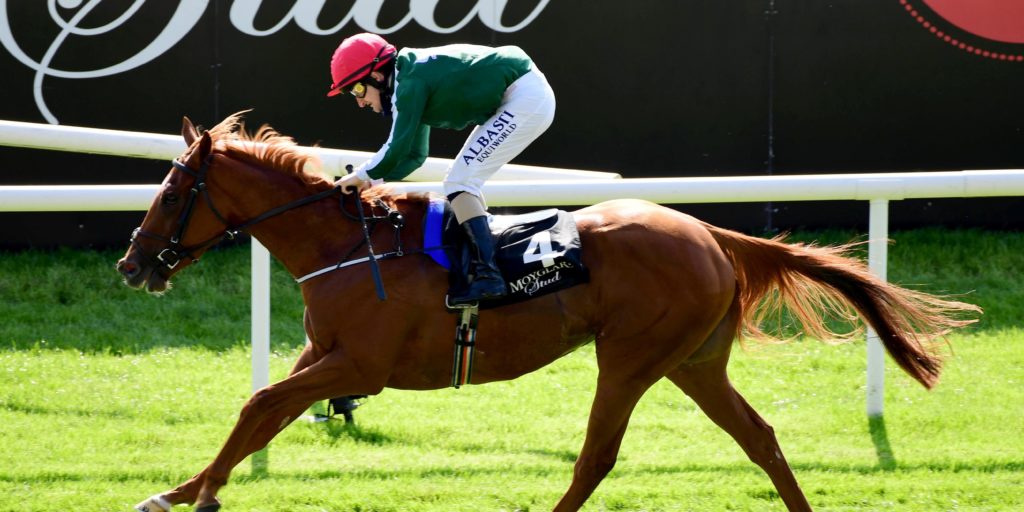 Cayenne Pepper was rewarded for a string of consistent efforts with a stylish victory in the Moyglare “Jewels” Blandford Stakes at the Curragh. Jessica Harrington’s filly had shown smart form as a juvenile and went on to be fourth in the Fillies’ Mile. This year she had been second in all three of her runs, including the Irish Oaks, but had been beaten at a short price in the Give Thanks Stakes most recently. Dropped back to 10 furlongs on this occasion, though, Shane Foley always looked in command. He tracked Amma Grace into the straight before taking up the running over a furlong out and his mount powered through the line to take the Group Two honours by four lengths at 3-1. Aidan O’Brien’s Magic Wand was a disappointing favourite. Assistant trainer Kate Harrington said: “That was the true Cayenne Pepper. She got a good tow into the race and was really impressive. “We had a lot of issues with her in the spring and today was the first day she looked well and strong. “She’s in the Prix de l’Opera, but I think Alpine Star goes there. She’s got an invite for the QEII at the Keeneland and she could stay over there for the Breeders’ Cup. “It’s sad that Jon Kelly (owner) wasn’t around to see her, but he’ll be up there looking down on her. He passed away a week after the Oaks. It’s lovely for her to win, but it’s a bit emotional. “We might go to America with her for Sarah (Kelly to see her, providing everything is OK.s Cup. “We’ll let the dust settle and see how she is this week.” There was a British-trained success in the Irish Stallion Farms EBF “Bold Lad” Sprint Handicap, with Richard Fahey’s Mr Lupton lifting the valuable pot. Fahey’s charge had won a Group Two at the Curragh last May, but had been winless since and largely out of sorts. He hinted at a return to form last time out when third in the Great St Wilfrid and the well-backed 11-2 favourite streaked clear with a furlong to run. Lil Grey kept him honest home before fading into third, with Blairmayne running on into second, beaten half a length. Fahey said: “He’s a wonderful horse. He’d lost his way a bit, but at least it gave him a chance to come back to handicaps and we’re delighted with him – he’s a star. “All going well the plan is to take him to the Ayr Gold Cup next week. We were going to go straight there, but the prize-money on offer today took over – it was a good prize to win.”