Home News Plenty to look forward to for Jatiluwih team

Plenty to look forward to for Jatiluwih team 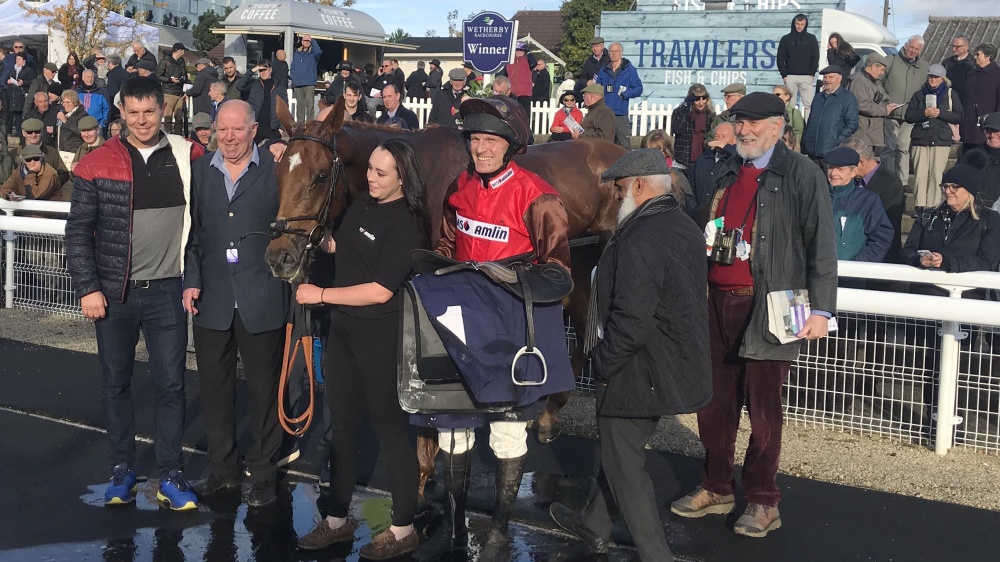 Jatiluwih looks an exciting prospect for trainer Philip Hobbs and owner-jockey David Maxwell after making it four from four since arriving in Britain at Wetherby. The French recruit was an 11-2 chance to add to his earlier wins at Ludlow, Chepstow and Sedgefield, with point-to-point graduate West Cork a warm order as the 6-5 favourite. Despite getting loose before the start, Jatiluwih travelled through the race itself like a class act and proved five lengths too strong for the market leader. Maxwell said: “He just jinked at a little puddle going to the start and I wasn’t ready for it, so I went out the side door and ended up on my backside. The last time that happened I actually won a Grade Three at Auteuil, so maybe I should do it more often! “He’s a very good horse as he was giving weight to some good horses there. He’s a real pro and a joy to ride. ” The father-son combination of Nigel and Sam Twiston-Davies landed the featured Bobby Renton Handicap Chase with Crievehill. The Highclere Thoroughbred Racing-owned seven-year-old was last seen finishing fourth in the Kim Muir at the Cheltenham Festival and was renewing rivalry with Jonjo O’Neill’s Sky Pirate – seventh in the same race at the Cheltenham Festival in March. The 9-4 joint-favourites turned for home together and Sky Pirate looked to be travelling marginally better when crashing out four fences from home. From there the result was never really in doubt, with Crievehill safely negotiating the remaining obstacles to score by nine lengths. Sam Twiston-Davies said: “That’s a good start to his season. He could go further on better ground, but on softer ground he can run over two-and-a-half as he’s such a good jumper. ” Lady Shanawell registered her second victory over jumps in division one of the Quilter Cheviot Juvenile Hurdle. A winner at Cartmel during the summer, Ben Haslam’s filly was pulled up when well-fancied to follow up at Hexham earlier this month. She was sent off at 11-2 to bounce back and the made the most of the fall of even-money favourite Zeb Spirit – who was in command when coming to grief three flights from the finish – to score by a length and three-quarters under Richie McLernon. Lady Shanawell did not return to the winner’s enclosure, but Haslam said: “She got a nick when the favourite came down. I think it’s just a superficial cut, but the vets obviously want to check her out. “The saddle slipped at Hexham, but it might have been a blessing in disguise as it was very deep ground over two-and-a-half (miles). If that hadn’t happened she probably wouldn’t have been here today – sometimes these things happen for a reason. ” Favourite-backers enjoyed better fortune in division two as the Alex Hales-trained Maria Magdalena led her rivals a merry dance in the hands of 5lb claimer Connor Brace. A back-to-back winner over hurdles at Market Rasen and Worcester in August, the daughter of Battle Of Marengo could only finish fifth when bidding for a hat-trick at Huntingdon a fortnight ago, but coasted to a seven-length success in West Yorkshire. Hales said: “She’s a lovely filly and she’s been a great buy (cost 5,500 guineas in May). That’s four she’s won for us now – three races over hurdles and one on the Flat. “She has a wonderful attitude, she’s as tough as nails and jumps well. She handled that softer ground today as well, which is good. ” Chris Grant’s Jacks Last Hope (13-2) followed up a last-time-out victory at Sedgefield with a determined display in the bet365 Charlie Hall Meeting 1st & 2nd November Handicap Hurdle, with Paddy Brennan the winning rider. Grant said: “We ran him over fences last year, but he’s not the biggest and I think he’s a probably a better hurdler. “He’s a summer horse really but he’s consistent and he won well. ” Ballyvic Boru was an 11-2 winner of the 100% Racing TV Profits Back To Racing Handicap Chase for Brian Ellison and Brian Hughes. Ellison said: “He blew up at Kelso last time and we hoped he’d improve. I couldn’t see him being out of the three today, but I didn’t know if he’d win as he doesn’t always go through with it.”