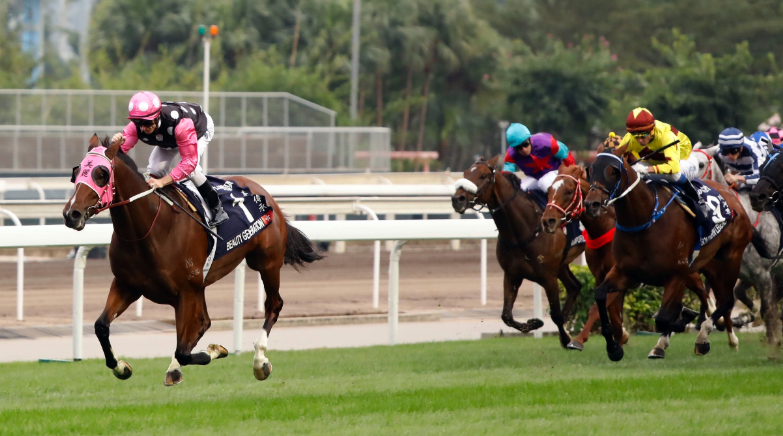 Beauty Generation returned to action with a comfortable victory on his comeback in the Celebration Cup at Sha Tin. Rated as the world’s best miler, he was reappearing over seven furlongs – but it made little difference to the versatile champion. Winning his 10th race in succession, the John Moore-trained seven-year-old had no trouble in seeing off clearly inferior rivals on his first outing since April. Settled not far off the pace by regular rider Zac Purton, the multiple Group One winner – who began his career in Australia – was giving a stone and more to all his opponents. He quickened up smartly on entering the straight and while Purton had no nudge him out to maintain a winning advantage, he never looked in any danger of being caught. Despite coasting in the final 100 yards Beauty Generation broke the track record. Bigger targets now await, while there is growing clamour for him to test himself outside of Hong Kong at the Dubai Carnival. Moore told www.hkjc. com: “That’s the first part of the mission accomplished! “With the tail-wind in the straight today, I thought he’d have to break a track record to give so much weight away to the others – and he did. “Zac said he felt it in the last 50 metres, but that’s to be expected when you’re carrying 133 pounds and giving away so much weight. “We’re right on target now to go and do what we did last season. Let’s move on to the next one, the Group 2 mile on 20 October, and then the Mile trial (G2 Jockey Club Mile) in November. “He’s the best in Hong Kong, and he’s one of the best in the world. They’ve got to come to beat him in December – and if the owner agrees, we’ll take him to Dubai and prove him on the world stage. That’s definitely in my diary, if everything goes to plan up to then. “It’s the twilight of my career, and I’d love to take him overseas and win a  Group One, to let the whole world see how good he is. “I would regret it 100 per cent if we didn’t try it. But the owner has talked about travelling – so I think if he’s sound and healthy, definitely. “He’s done everything else but he hasn’t won off-shore, and I’m of the opinion he’ll definitely travel. But let’s take them as they come, and we can talk about Dubai when that time is approaching.”