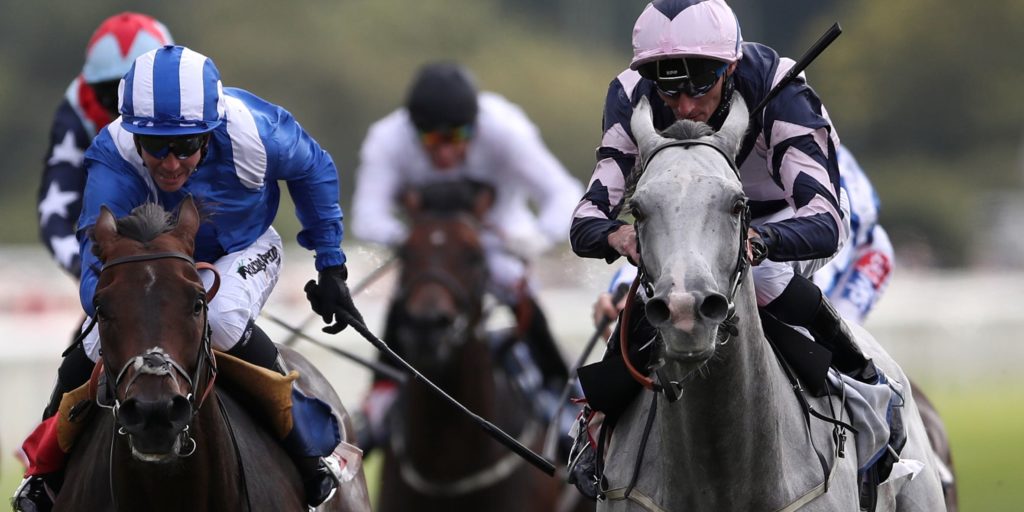 O’Meara runner lines up in Meydan Group One.

David O’Meara is pleased Lord Glitters has no penalty to carry when he goes for Group One glory in the Jebel Hatta at Meydan on ‘Super Saturday’. The popular eight-year-old grey had 3lb extra to carry when going down by only three-quarters of a length by Zakouski in the Group Two Al Rashidiya over this nine furlongs on his latest start. He had beaten Charlie Appleby’s charge by three lengths when they met on level terms in the Singspiel Stakes over the course and distance in January. “He’s in good form and he likes the track,” said O’Meara. “He ran well there last time out with his penalty which he won’t carry this time, so I’m really happy with him.” Lord Glitters is no stranger to Group One success, having taken the Queen Anne Stakes at Royal Ascot in 2019. Godolphin have won six of the last eight renewals of the nine-furlong turf feature, and three contenders this year include the Appleby-trained pair of Al Suhail and Art Du Val. Appleby told www.godoplhin.com: “Al Suhail had a setback after winning at Newmarket and subsequently we have had our eye on a Dubai campaign for him. “His preparation has gone well and he did a nice racecourse gallop at Meydan last week. We are hoping that he can run a decent race with an eye on going on to the Group One Dubai Turf later in the month, so we expect him to come on for the run. “We have no doubt about his ability to run at this level, but he just needs to keep his head together. “Art Du Val ran a creditable race over this course and distance in the Singspiel Stakes and was also very competitive in the Zabeel Mile last time out. “We think the return to nine furlongs is going to suit and, while he doesn’t look out of place in the field, he will need to up his game again to be in the mix.” Royal Marine, trained by Saeed bin Suroor, is Godolphin’s other contender. “Royal Marine always works well in the mornings, when he shows some real class, but we would like him to start displaying it again in his races,” said Bin Suroor. “He has won at this level in the past, but it’s a case of seeing how he gets on.” Nigel Tinkler has his fingers crossed Acklam Express will stay the six furlongs of the Nad Al Sheba Turf Sprint. The three-year-old has only run over five furlongs, but gave the impression the extra distance would be within his compass when staying on well to finish second behind Equilateral on his Meydan debut two weeks ago. “We’re keeping our fingers crossed he’ll get the six. If he does, he’ll run well. He was staying on last time and you never know unless you try it,” said Tinkler. “The horse is enjoying it. Rowan Scott is riding him out every day and he’s very well and we’re looking forward to Saturday. “If he does gets six, it opens up a lot of options throughout the year.” Godolphin are again three-handed, with Royal Crusade and Man Of Promise representing the Appleby team. Appleby said: “Royal Crusade won a strong sprint in France on his latest start and any sign of his three-year-old form will make him very competitive. We have one eye on the Al Quoz Sprint for him and we are hoping for some marked improvement on whatever he does here. “Man Of Promise has done nothing wrong in his short career and was very impressive in the Dubai Sprint. He is stepping up to Group company and needs to find a bit more again, which we are quietly confident he will do based on his work at home.” Bin Suroor is responsible for Final Song and said: “Final Song ran a very good race over this distance last time out and six furlongs seems to be her trip now. I have been pleased with her work and I’m looking for another good result.” Bin Suroor is looking forward to running Dubai Mirage on dirt for the first time in round three of the Al Maktoum Challenge. The son of Dubawi has filled the runner-up spot in turf handicaps on both his Meydan starts this year and won on his only previous all-weather outing, at Kempton in June. Bin Suroor said: “Dubai Mirage has run well on the turf so far this season, finishing second on both occasions, and we wanted to give him a chance on the dirt. This will be a very tough race, but he has been going nicely at home.” Dubai Mirage can expect strong competition from the likes of Doug Watson’s Thegreatcollection, runner-up in the two previous rounds, and the Fawzi Abdulla Nass-trained Salute The Soldier, winner of round two and third in round one.